Sharon Pierre-Louis started signing around the age of six or seven after meeting her Deaf older brother for the first time when he immigrated to the United States from Haiti as a teen. From the moment Sharon met him and was introduced to using her hands for communication, she was determined to learn the language and would run around the house pointing to things while he would show her the correlating signs. In an attempt to increase her vocabulary, Pierre-Louis started teaching herself more signs with an American Sign Language book around the time she was in high school, but it wasn’t until she took actual classes in the community that her skills really began to build. She ended up getting not only a BFA degree in acting, but went back to school to get her degree in American Sign Language Interpreting and Transliterating, graduating from Pierce College two years later.

Sharon was on the last two seasons of Freeform’s Switched at Birth in the recurring guest star role of Iris Watkins. She played a hearing college student in the Deaf program studying to become an interpreter. In the fifth season, the show explores the topic of racism on college campuses in which Sharon’s character, Iris, is forever changed. This groundbreaking show has Deaf actors, uses American Sign Language, and is a pioneer in exploring more deeply the Deaf experience on television. The entire show is now available to be seen on Netflix. The last season took Switched at Birth beyond the 100-episode mark, possibly meaning long-term syndication for the series. 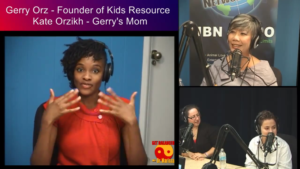